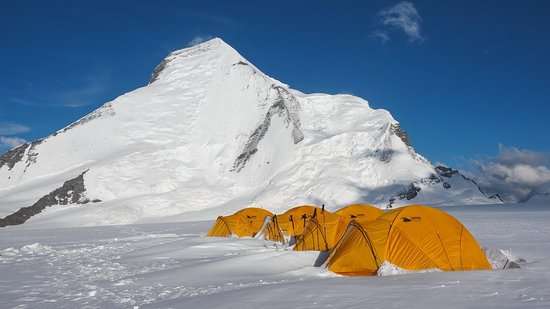 Mount Thelu falls in the Garhwal range of the Himalayas. The region is called a mountaineer’s paradise, as one has ample opportunities to climb here. Mountaineers from all around the world can be seen here, with dreams of climbing one of the mountains in the region. The range consists of some of the main peaks of the Garhwal region, like, Mt. Shivling, Mt. Meru 1,2,3, Mt. Thalaysagar, Mt. Saifi 1,2, Mt. Sudarshan, Mt. Bhrigupanth, Mt. Kedar Dome, Mt. Chaukhamba, Mt. Bhagirathi 1,2,3, Mt. Satopanth and countless unnamed peaks. A little bit of information about some peaks, as I know, is given below.
Amongst these various peaks, Mt. Satopanth and Mt. Thalaysagar are considered two toughest ones to climb. People say that even the approach march to the base camp of these peaks constitutes a long trek within itself. Mt. Shivling is known for its East Pillar, which was first climbed by Doug Scott in a truely alpine style.
One of our mentors, Mr. Surendra Chavan, fondly called S A, is a summiteer of Mt. Satopanth as well as Mt. Everest. We were fortunate enough to get some tips from him, during our practise sessions in the Sahyadris.
Mt. Chaukhamba is another remote peak, for which, one has to place 6 to 7 camps on the Bhagirathi glacier, known for its treacherous morrain, the snout of which is nothing else but the sacred “Gaumukh”, the birth of river Ganga.

Contact us for planning your Thelu  Expedition with best travel packages of as per your requirements!